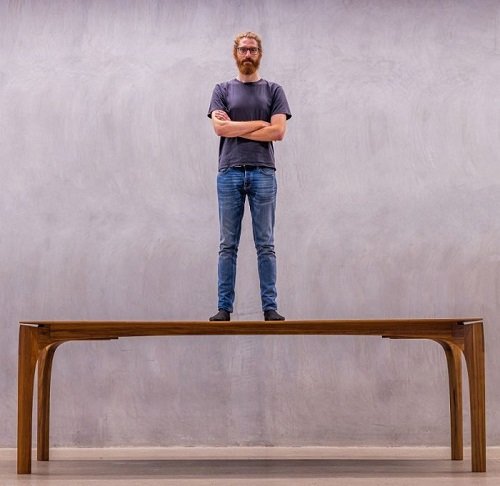 January, 2022 – Adam Markowitz is a 2014 graduate of the Center’s Furniture Intensive who successfully combines the careers of architect and furniture maker in Melbourne, Australia. When he arrived in Maine for the Intensive, Adam was already a qualified architect and a practicing woodworker. “Working in my own shop,” he says, “I found that my skills weren’t up to making what I was designing. There were big gaps in my knowledge that I planned to fill at CFC.” He was also beguiled by our climate: “Coming from Australia, the snowy north was romantic… until the third or fourth time I had to dig my car out!”

Looking back on the twelve weeks now, Adam says, “I came away with a very solid skill base. It was almost a crazy amount of information to convey in such a short amount of time. Tim Rousseau is an incredible teacher. The little things stick with me as much as major techniques. You can learn lamination from books, but Tim would say ‘You need to think about x and y ahead of time or this could happen’, which has proven invaluable.”

Returning to his hometown of Melbourne after the Intensive, Adam set up a shared workspace and picked up some great commissions, such as a boardroom table for the Architecture School at Melbourne University. Since then, he has explored a variety of business models, including custom one-off production, batch production, and outsourced production. Selling fine furniture in Australia is difficult, Adam reports, because the population is small and the market is highly competitive. On the other hand, his private architectural work has snowballed, so he divides his time between the two passions.

“I spend a lot of time behind the computer these days,” Adam shares, “so time at the bench is special. There’s a feeling you get at the end of the day, as a designer/maker, that you just don’t get doing anything else; it’s the good kind of exhaustion – physical, mental, and creative.”