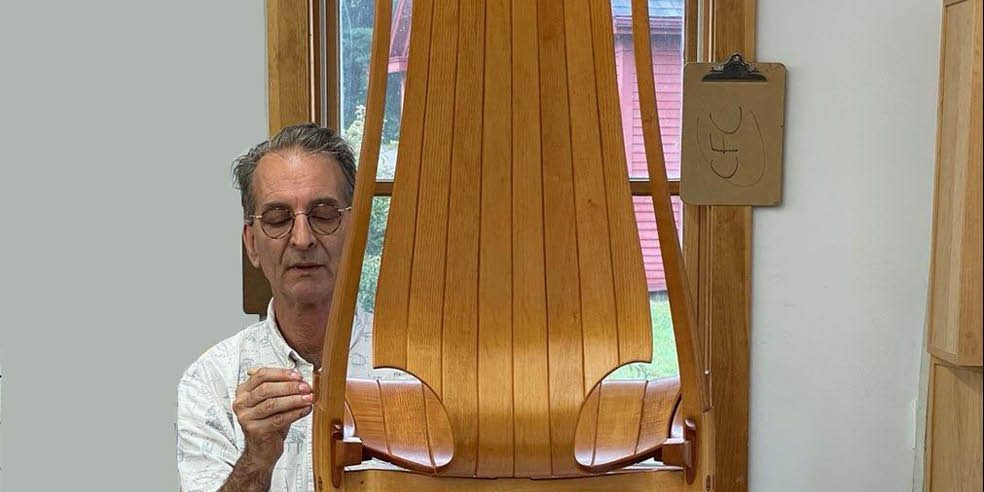 For almost 30 years, the Center for Furniture Craftsmanship has been a crossroads where woodworkers from around the world connect to share skills, forge friendships, and transmit knowledge from one generation to the next. The community to which we belong runs deep and strong, as the following story illustrates.

The year was 1976. Tom Hucker (pictured above) was a young student at the recently created Program in Artisanry at Boston University, studying woodworking under Jere Osgood. The first assignment was to create a lightweight chair that would be strong enough to survive a tumble down a flight of steps or similar mishaps. As one would expect of a student of Jere Osgood, Tom was influenced to use tapered bent laminations in meeting the challenge, which he did handsomely. Being a footloose woodworker-in-training, Tom kept his possessions light. So at the end of the program he left the chair behind – whether abandoned in the classroom or consigned to the scrap heap is unclear to him after all this time. Suffice to say that Tom never thought about the chair again. But something about that chair appealed to Jere, because he rescued it and stored it in his workshop. He even used it to illustrate an article on bent lamination in the Spring, 1977 issue of Fine Woodworking.

Fast forward 42 years to 2018. Tom has had an impressive woodworking career and is on our campus as a Visiting Artist. He decides on the spur of the moment to make a quick trip to New Hampshire to visit his mentor, who is closing up shop. When he gets there, Jere surprises him by saying, “Tom, you know I’ve got your chair.” And sure enough, there it is in the corner of the shop: dusty, forlorn, in need of minor repairs, but gloriously whole.

Three years later (i.e. this July) Tom comes back to CFC as an instructor, takes one of the Fellows to meet Jere, and returns with the chair. It has become an artifact of Tom’s early passion to master the technical challenges of joinery and curvature. Studying it, says Tom, reminds him of techniques he used to use that he unwittingly moved away from later in his career. It is also a tangible reminder of the impact Jere had on his work, and the richly supportive woodworking community to which he belongs.

When Tom finished teaching his two-week workshop here last month, we’re pretty sure he didn’t rescue a student’s work from the dumpster in the parking lot. All the same, we are confident that he generously passed on much of what he learnt from Jere, 45 years ago.