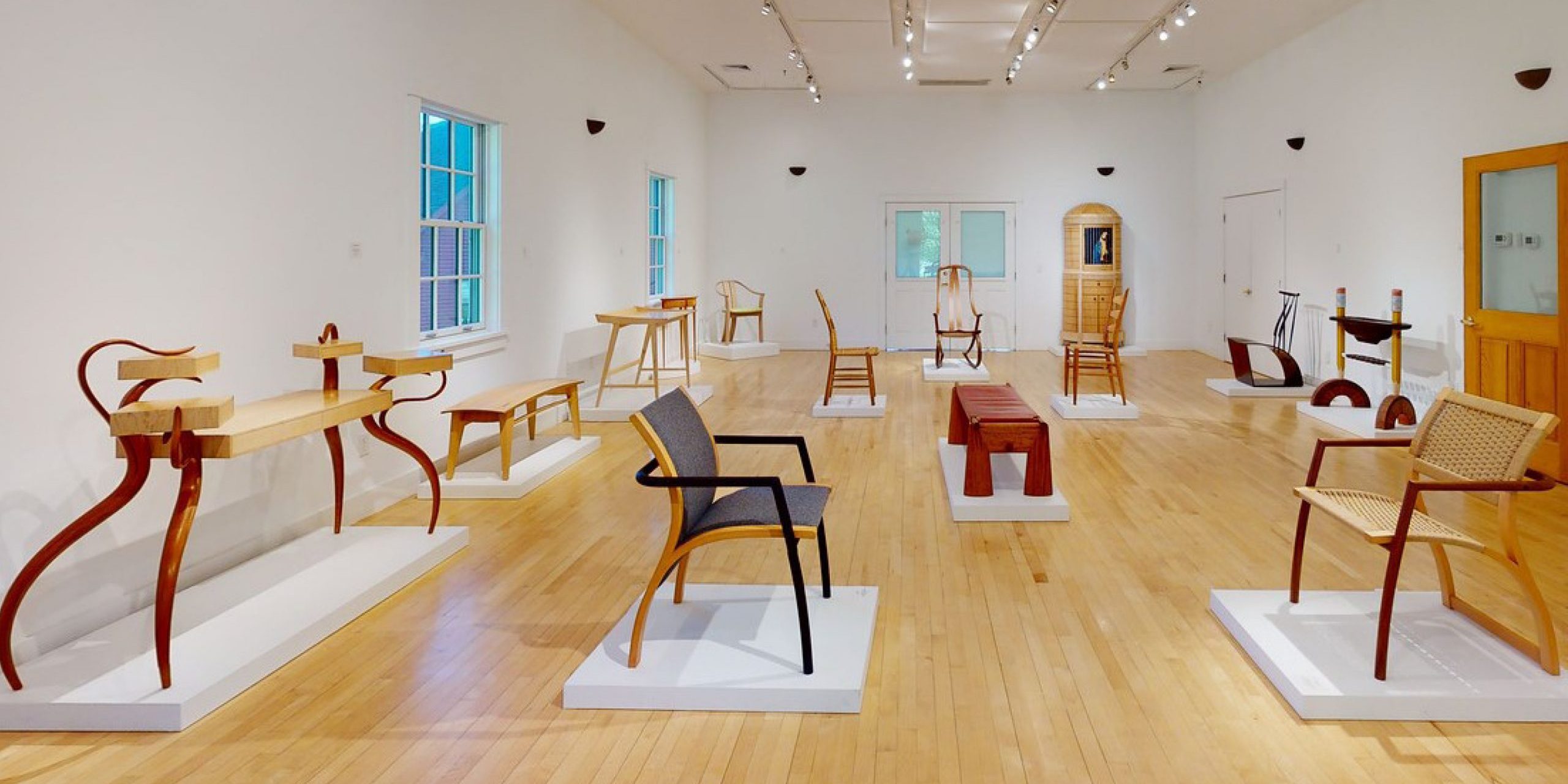 With my retirement as CFC’s Executive Director fast approaching, I wanted to celebrate some of the mentors and peers whose friendship has enriched my half-century in woodworking, whose work I greatly admire, and whose generous teaching has contributed to the success of the Center for Furniture Craftsmanship. The exhibition conveys the mission of the school better than words ever could. Standing in the gallery, I particularly notice a refreshing absence of irony. Every piece is made by someone who was fully invested in their creative process and took full ownership for the result. It is work made straight from the heart.

Beginning in the 1980s, I was fortunate to assist a number of legendary woodworkers in teaching workshops, first at Anderson Ranch Arts Center and then at CFC. The four who are represented in the show—Art Carpenter, Tage Frid, Jim Krenov, and Alan Peters—are those whom I especially appreciated, admired, and learned from.

When I contacted Tage’s children, Peter and Ann, about a piece for the show, they asked if I wanted his signature stool. But what I really hoped for was the sideboard that Tage showed me with pride at his house in Rhode Island, 35 years ago. How wonderful to see it again, to touch the wood, and to slide a drawer that Tage fit with his own hands!

What I particularly remember from visiting Alan and Laura Peters at their farmhouse in Devon are stacks of flitch-sawn, air-dried, local hardwoods, as knotty and full of character as Alan was himself, stored in stone sheds near the workshop. Alan may have put his pants on like the rest of us, one leg at a time, but in my eyes he walked on water for the honesty of his work and the passion he brought to craftsmanship and design.

In all these years I have only purchased furniture from one other maker, Brian Boggs. With so many of my own prototypes and unsold pieces in the house, there hasn’t been room for much else. But chairs are my passion and, to me, this one is perfect: comfortable, attractive, strong, durable, lightweight, and affordable. It’s the pure, pared down essence of chairness.

I loved this bench by Michael Puryear the moment I saw a photo of it, decades ago. Now that I can finally see it in person, thanks to the kindness of the collectors who own it, the bubinga, leather, and joinery are well worn…but then again, so are Michael and me.

I watched David Upfill-Brown create this desk on commission while he was as a Fellow at CFC, in 2012. At the time, I admired it. Now it just blows me away!

This being my farewell show as founder of the Center for Furniture Craftsmanship, I’ve taken the liberty of including four of my own pieces. There is a dictionary stand, first designed in 1981, through which I initially found my voice in design. There is a continuous-arm chair from 2014 that pleases me to this day. And there are two prototypes of the chair I’m currently working on.

Straight From the Heart is showing in the Messler Gallery until January 5, 2022. You may view the full gallery show in a virtual tour at https://my.matterport.com/show/?m=DTVcYEzQrz4.